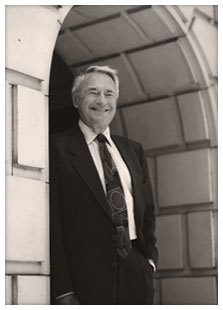 The origins of Dano Law Firm, P.S. began in the mid 1940s when Harrison K. Dano, returning from WWII, partnered with FA Kern in Ellensburg, WA to begin Kern and Dano, a general practice firm. Over the years the firm grew, adding partners (and names) and became a highly respected Ellensburg law firm. In 1977, Harry led the firm expansion to Moses Lake. He had garnered a strong understanding of water and reclamation law and gained many clients in this area, including Paul Lauzier, as the Basin began opening up to greater farming opportunities. On the side, Harry tried his hand at farming, with his sons, Brian and Garth, farming with him when they were younger. Many changes occurred...the farming didn't work out and the Moses Lake branch of the Ellensburg law firm split from their Ellensburg associates. In 1984, Brian moved from Ellensburg to Moses Lake and joined in the established practice with his father and brother, Garth.

Neither of the Dano brothers had planned to follow their father's footsteps as attorneys, nor did their father expect it of them. Brian had intended to become a football coach, playing the game in both high school and college, but by the time he'd become a senior at Washington State University, he decided that wasn't the career for him. Instead, he headed to law school at Gonzaga University, a decision he claims was a "spur of the moment" idea.

Although Harry Dano did not expect his sons to go into law as a profession, he did expect them to work hard and instilled a tremendous work ethic in all of his children. Harry literally worked nights, days and weekends. He believed that a lawyer had an obligation to give back to the community and impressed this same belief of the importance of community involvement upon his sons. As Brian explains it, "the thing he impressed upon us, and one of the reasons he was working so much, was he also took the time to be involved and participate in a number of community organizations including  the Chamber of Commerce and the Rotary Club. My dad always said,

Community involvement has been a cornerstone of Dano Law Firm and one of the firm's values. Brian added, "he lived that belief and I know it was a big influence with me, because as soon as I started practicing law I was immediately a member of the Rotary Club, the Chamber, the Rodeo Board and a variety of community groups."

Brian has kept up this tradition of community involvement during his 35+ years of practice in Moses Lake where he has also been involved in the Moses Lake Tourism Commission, the Moses Lake Parks and Recreation Commission, the Grant County Economic Development Council, the Big Bend Community College Foundation, Vision 20/20 and several other local and regional political endeavors.

the Values of Dano Law Firm, instilled by our founder, Harrison Dano.

The past 55+ years has seen many changes at Dano Law Firm...name changes, location changes, and  partner changes. Through the changes, one thing has remained unchanged and true to our founder's vision...

our commitment to providing peace of mind to our clients and our team.

Thank you for contacting us. We will get back to you shortly.

Please complete all required fields below.

How We Can Help

At Dano Law Firm, P.S. we have been providing peace of mind and decades of experience in the areas of real estate and business transactions; estate and future planning; probate administration; and limited liability company (LLC)/corporation creation, management and transactions. We partner with you by first listening and understanding what you need. Then with that knowledge and our expertise, we customize a solution to your situation that is attentive to details and timelines and always confidential.

Call or email today to see how we can work together for your peace of mind.